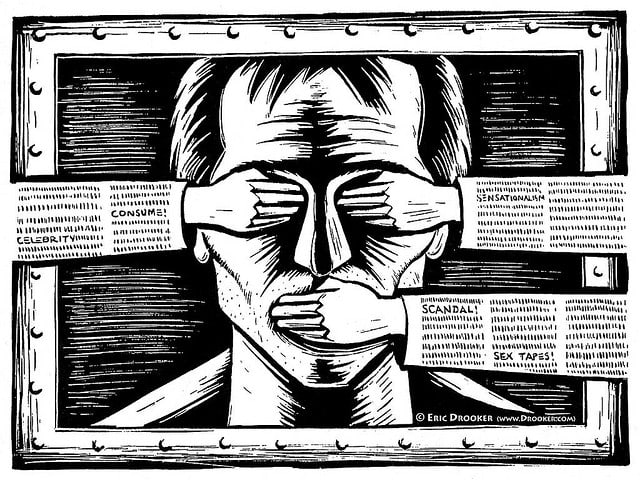 When it comes to porn and vulgarities, the large majority of our society is used to seeing tumultuous conduct widespread throughout the internet, TV and in publications. Even when you aren’t expecting it, it appears. Culture has made us immune to a flash of boobs, a love scene or a well-screamed “fuck” within parameters. While viewers are not necessarily hoping for it, they come to expect it from networks and shows. Unconsciously rooting for the main characters to end up together, most likely in bed. Or become an overnight news story obsessed with Janet Jackson’s exposed breast during the Super Bowl halftime show. Throughout past decades the main question and obsession brought up to the Supreme Court and society is, how much is too much vulgar? When does it impede on a citizen’s right to free speech and when does it interfere with protecting someone innocent from being unwillingly exposed?

In Chapter 8 of Anthony Lewis’s Freedom for the Thought That We Hate discusses challenges that the Supreme Court ruled on in terms of porn and obscenities. In the 1971 case of Paul Robert Cohen v. California involved Cohen walking through a courthouse wearing a jacket that said, ‘Fuck the Draft.’ The court ruled in his favor reversing his conviction for engaging in tumultuous conduct, reinforcing that it violated his First Amendment rights. In writing the opinion of the court, Justice John Marshall Harlan made a long-lasting impression with the statement, “One man’s vulgarity is another’s lyric,” then continuing, “… putting the decision as to what views shall be voiced largely into the hands of each of us, in the hope that use of such freedom will ultimately produce a more capable citizenry.” Other rulings from the Supreme Court before this did not have the same outcome. Since 1920 the literary masterpiece Ulysses was banned because of a chapter in which a character masturbated. Movies were also brought into this controversy, considered for a long time outside of constitutional protection. Difficult because it is all dependent on ones’ own opinion of what is too provocative. The view of a male Christian republican differs from that of a female liberal. Meaning acts of crudeness can be someone else’s truth.

The result of all of this is perplexity. What about the right to sexual expression in the First Amendment? People argue that vulgarity contaminates views surrounding love and sex; the sanctimonious tradition of marriage and family. Except no one is innocent, and people are exposed to explicitness whether seen in movies, read in a book or talked about between friends. Books and movies are created to tell different stories from unique perspectives to educate on ideas that people do not realize or understand. Reality can be offensive, but it can also be wholesome. Vulgarity is a part of life, not just a fantasy, that should be viewed. There are ratings warning viewers of the content in order for you, the viewer, to censor as you see fit for yourself or others. If you don’t like what you are watching, turn it off. The only true restriction of media is the right for people to not watch. However other people have a First Amendment right to watch or read whatever they want regardless of how bad-mannered it may be.