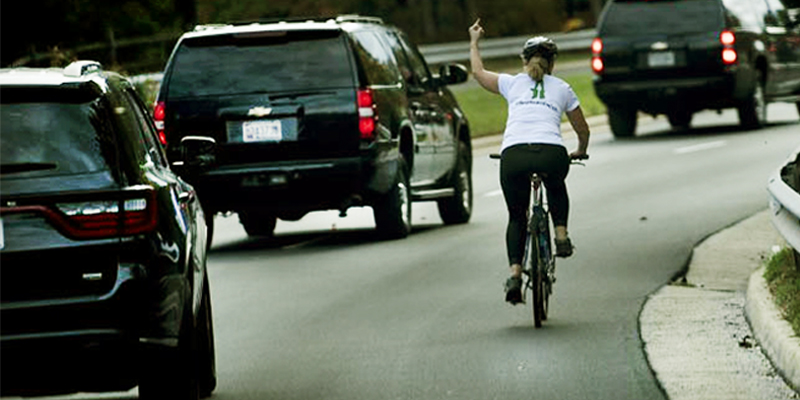 The image of a woman on a bicycle has caused a lot of buzz recently. Specifically, the woman who was photographed giving the middle finger to Trump’s motorcade while pedaling beside it. A BBC article came out on November 6, stating that the woman had been fired from her job because she made this gesture and subsequently posted it on her social media. The woman later identified as Juli Briskman, said she was fired from her job after posting a photograph taken of her flipping off the motorcade. She told the Huffington Post that her employers, at Akima LLC fired her because they believed the gesture to be “obscene” or “lewd.” They also informed her that by posting this photograph she had violated their social media policy, even though she had not posted it during work hours. Additionally, the image was posted to her private Facebook and there was no mention of her employers.

Firstly, “obscene” and “lewd” are defined by their sexual nature. Obscenity has to do with the portrayal of sexual matters in an offensive or disgusting way. And lewdness is defined as involving anything sexually unchaste or licentious.

The First Amendment does not protect certain speech, such as fighting words, or words which “incite an immediate breach of the peace” (Cohen V. California). That being said, the middle finger does not  “appeal to prurient interest,”( Miller v. California) nor does it incite direct violence. It’s a rude gesture many people could find distasteful or offensive but it is not a violation of the First Amendment. Briskman was far within her rights when she made this gesture. If feet of pavement and car doors had not separated her from Trump, it might be a different story. But she is significantly removed from the ability to commit a violent act.

However, the claims of the company which said it violated their social media policy are (sort of) within their rights as a private organization. The reason I say sort of is because it really does depend on the contract Briskman signed upon being hired. The Washington Post reported on the social media portion of the company’s policy. It is a quite broad policy so part of me can understand why the social media buzz around her post could get her fired (not that I agree with it).

There is also a slight conflict of interest, though, when you take into account that Akima LLC is a government contract company. Although it is a private organization, there is no doubt in my mind that the executives did not think twice about firing her. They could predict what having an employee who “disrespects” Trump would do to their business- and my bets are, it would not have been good.

That being said, though, there is another conflict of interest here. It is also important to note that Briskman was in charge of Akima’s social media presence. Her job was to promote the company in a good manner. For her own social media to have “obscene” gestures does not exactly set the best example for the company. But because the post was exclusively on her personal social media and she did not post it during work hours there is a case to be made that this was her personal life (which should remain unconnected to the company). Looking at her Instagram, her privacy settings are not public. She is a private citizen. However, the problem here is that she voluntarily posted this image and now that it has gone viral she is technically not a private citizen anymore. She signed away some of her rights when she agreed to popularize her name in connection with the photograph.

My opinion is that she should not have been fired (so quickly) for posting something on a private account, without connection to the company she worked for, and in exercising her right to free speech. I do believe, though, that the company should have asked her to remove the photograph with the intention of firing her, should she not comply.

Yes, having a personal life is important but you can also resist the urge to post on social media, as well. However, that in itself is controversial. So yes, you can resist the urge but should you have to?

The photograph would probably have gone viral without her posting it. And she did not need to name herself. She was within her rights to so but now she also has to deal with the consequences of being a limited purpose public figure. This in turn, comes with less right to privacy, giving the company a better case for claiming her private life is within the scope of the company’s interests.

The entire ordeal has America split. Some people see it as a violation of the First Amendment, and others see it simply as the company’s internal affairs. And there are a multitude of opinions in between the two extremes.

As for Briskman, she has no regrets about making the gesture and is glad she posted the picture, despite the cost.

One thought on “A Woman on a Bicycle…”