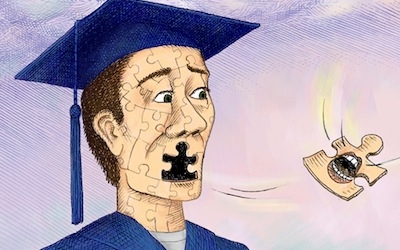 Colleges and Universities are beginning to realize that they were given an impossible task. They must figure out how to balance their universities goals while also making sure that students are able to have their rights. This is especially daunting for colleges because in order for the college to be successful it must create a welcoming and inclusive community for all. Certain colleges have recently been in the news when their students state that the school has issues related to cultural sensitivity. There have been events of swastika’s and the word N***** being drawn around school campuses. While students off campus dress up in black face or make a poor attempt to imitate Cinco de mayo; with overly size hats and other offensive props. Off course because of actions like these, and others that were not mentioned schools have begun to put certain stipulations in place in order to protect students. These are things like Safe Spaces, Trigger Warnings, and mandatory classes that promote inclusivity. Of Course, these new undertakings have also gotten negative attention because many students believe that these things violate their first amendment.

The idea of a safe space itself is harmful to not only freedom of speech but the institution of college within itself. For example, if I enter into the safe space with drastically different values than another student that is entering in; the space is no longer “safe” for either of us. One of us may say something that offends the other, even without intending to do so. Another issue with safe spaces is that it allows students to remain within their comfort zone. The point of college and gaining a decent education is that fact that students are often pushed. We are supposed to be uncomfortable in the hopes that it will actually allow us to learn and grow. If we are stopping these conversations that may cause conflict there is no way for me to learn from another student that has opposing views from me or vice versa.

In the text Freedom for the Thought We Hate by Anthony Lewis, we learn about universities that have adopted “Speech Codes”. The text says that:

“In practice they dealt with hurtful comments from a wide range of matters beyond the original proposal, race. One of the best known codes, adopted by Stanford University, prohibited….[harassment]…when it was intended to stigmatize an individual or a small number of individuals on the basis of their sex, race, color, handicap, religion, sexual orientation, or national or ethnic origin” (Lewis, 163).

Other colleges and universities quickly added to the list. The universities had lists that also included age, marital status, veteran status, citizen, culture, H.I.V status, language, parental status, political beliefs and pregnancy. The first thing that comes to mind when I think about this extensive list, is that they aim to limit speech on every topic available. I’m a junior in college and I could not imagine having to tip toe around all of these topics just because someone might feel offended by what I say. After this list, there is nothing left to talk about. By putting limits on these topics you are not just stopping harmful or offensive language you are also indirectly putting a halt to criticism, and even humor to some degree.

In 1989, a court found that these types of speech codes are unconstitutional. They limit someone’s speech just because it may hurt someone. My First Amendment allows me to be as hurtful or offensive as I want, because I am allowed to freely express myself. In my opinion this is what colleges should put their energy towards. They should teach us our first amendment rights, but then follow that lesson up by saying; that just because you can say something does not mean you actually should.