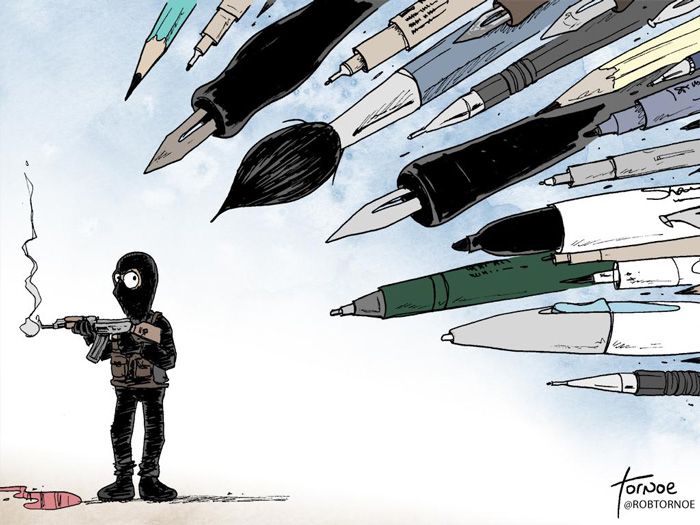 I was in high school when the Charlie Hebdo shooting happened in Paris. The shooting, which killed 12 people and injured 11, was in response to comics published by the satirical newspaper that depicted the Prophet Muhammad. Islam forbids depictions of the Prophet, and in nations where Islamic law is in place, those who create images can be prosecuted. France is exempt from this, of course, but legality did not stop extremists from carrying out their own consequences for this ‘violation’ to the employees at the newspaper.

At the time, I was angry at all the people siding with the newspaper. “Je suis Charlie? Why would you ever want to align yourself with such a disrespectful group?” My sixteen-year-old self wondered. I even had a sit-down talk with my principal when he decided to pay his respects to Charlie Hebdo over the loudspeaker and asked why he had not mentioned or acknowledged the fact that Muslims face religious persecution in France every day, even in schools. The extremists in the population were bound to lose it eventually. Why would they publish something that would make people angry? He tried to explain the concept of “freedom for the speech we hate,” and the fact that retaliation is unjust, but when I could not grasp it, he offered me some Skittles and politely walked me out of his office.

Looking back, I recognize what occurred at Charlie Hebdo was an attempt to silence critics and incite fear – terrorism, by definition, which I completely condemn. But Reading Lewis’ Freedom For the Thought That We Hate, I could not find a positive reason to keep controversial or anger-inciting speech protected. Putting speech codes in place will make a private institution or government a target for critics of political correctness – better that than a target for terrorism, right? If everyone was held to the same standard of sanitization, we would not have to watch communities struggle with “technically constitutional” threats like the Skokie demonstration or Charlottesville. Controlling what people say, and stopping them before they escalate, could prevent another genocide – just has been done in Rwanda or Europe.

Lewis’ proposition at the end of chapter 10 is “I think we should be able to punish speech that urges terrorist violence to an audience, some of whose members are ready to act on the urging.” I’m not sure if I agree. While at the surface, this makes sense – yes, you should not be able to get on the radio and tell the majority of the population to kill the minority – Charlie Hebdo teaches us that any sort of speech, even satire, can incite or “urge” terrorist violence. People can get angry at a comic, a neighborhood, or just someone else’s existence. The speech, the communities, the materials that “incite” terrorism should not be punished – the terrorists should, which can happen by removing them from platforms where they can interact with such speech and respond with hate.

One thought on “What Makes Them “Tick”?”