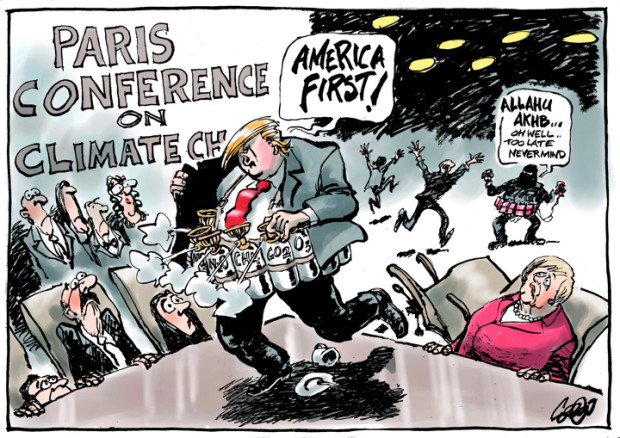 As we’re sitting in the midst of an almost impeachment, I’ve been thinking that there is no way Trump can screw us over more than he has in the last few weeks. Boy, was I wrong.

The Trump Administration released that they are starting the official process of withdrawing from the Paris climate agreement. For those who don’t know what it is, it’s within the United Nations Framework Convention on Climate Change and deals with greenhouse-gas-emissions, mitigation, adaptation, and finance.

Almost 200 nations have signed the agreement in which every country their own goals to lower emissions of the gases that create climate change. Since being ratified in 2016, the United States was the first country (and only country so far) to pull out on the agreement. Disappointed but not surprised, I guess.

I know that I don’t understand numbers and I’m sure that enforcing this agreement is definitely going to be costly, but is this not going to be 100% worth it? To help save the Earth we will be living in, as well as our future children, grandchildren, and great grandchildren? There are almost 200 nations that want to protect our future and our Earth, and all the Trump Administration seems to care about is money.

Sorry to get a little dark, but there won’t be any money when we all basically burn to ash because greenhouse gases are trapping too much of Earth’s heat and raising it to temperatures that are uninhabitable. I know this is a bit dramatic, because I don’t think we will burn to ash. That being said, we have no idea how bad these temperatures are going to get and I dont know if it’s just me, but I’d rather not wait and see.