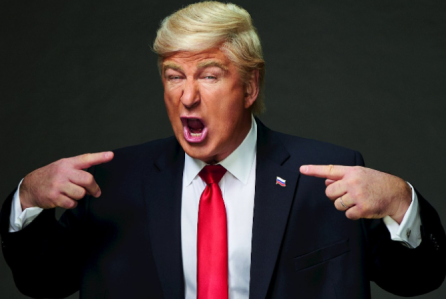 The “Weekend Update” segment also did not hold back on Kavanaugh’s confirmation. Co-host Colin Jost said, “The senate confirmed Brett Kavanaugh to the Supreme Court with a vote of 50 to 48. 50 is the lowest number of votes for a justice in history, but keep in mind it’s also the most yeses Kavanaugh has ever heard.” Co-host Michael Che also asked why female Republicans voted for Kavanaugh, stating, “So are you all like, hostages?”

Throughout the election and now almost two years into Trump’s presidency, SNL has continued to provide comedic relief, but not without backlash.

Back in 2016, SNL aired a sketch based on the second presidential debate between Hillary Clinton and Trump. The next morning Trump tweeted “Watched ‘Saturday Night Live’ hit job on me. Time to retire the boring and unfunny show. Alec Baldwin portrayal stinks. Media rigging election!”

This was not the first time Trump attacked comedians for making jokes about him. In the past he has lashed out at Jon Stewart, calling him a “total phony.” In 2013 Trump sued Bill Maher for $5 million in response to a joke made on “The Tonight Show.” One of Trump’s camping promises was to change libel laws, making it easier for people to sue media outlets for making criticisms.

Fortunately, the First Amendment protects SNL’s satire as a form of free speech and expression.

Various Supreme Court cases have upheld this right throughout the years. In the case of Hustler Magazine, Inc. v. Falwell (1988), the Court ruled in favor of the magazine, holding that the First Amendment protected a parody ad depicting public figure Jerry Falwell having an incestuous relationship. Basically, you can’t recover damages for emotional distress caused by parody or satire that is clearly not real.

For generations SNL has used satire and parody to criticize public figures and point out social injustices while making us laugh. Political satire has always been a difficult job. However, recently SNL has faced an almost impossible task. How do you make people laugh about a man accused of sexual assault being confirmed to the Supreme Court, just hours after it happened?

While it may be difficult to make people laugh about the current political environment, SNL’s right to do so is as important as ever.

2 thoughts on “Live from New York”